The public’s knowledge of the body is sketchy – here’s why it matters?

British people don’t seem to know their armpit from their elbow. Our latest study found that only 15% of the participants could locate their adrenal glands, and only 20% knew where their spleen and gallbladder was.

Perhaps it’s not surprising that people struggle to identify structures in their abdomen. It’s a pretty congested space, filled with all the organs for digestion: stomach, pancreas, liver, gallbladder, 20ft of intestines and the rectum, as well as the kidneys and all the blood vessels. But understanding the abdomen is important because lots of visits to the emergency department are for problems related to these structures: appendicitis, inflamed gallbladder, kidney stones, diverticulitis, aortic aneurysm.

Anatomy isn’t just a subject, it is also a language. When patients and healthcare professionals share this common language, consultations are smoother and patients report being more satisfied. However, research has shown that when doctors over-estimate their patients’ knowledge of anatomy, it can lead to worse health outcomes for the patient.

Although it’s not the patient’s job to have a detailed knowledge of anatomy, it can help doctors make a diagnosis more quickly and accurately.

Having some anatomical knowledge is part of what’s known as health literacy – the ability to “obtain, process and understand health information and services needed to make an appropriate decisions”. Being health literate can help you know when something is wrong and help you decide whether to make an appointment with your doctor or go straight to an emergency department – a fairly important choice to make as winter approaches and those departments begin to come under strain.

A hint that the British public have poor knowledge of their own anatomy came from an earlier poll, conducted by Prostate Cancer UK. The charity found that more than half of the 2,000 men they surveyed did not know where their prostate was. Alarmingly, 17% of the men surveyed didn’t know they had a prostate. Only 8% knew what it did.

If you’re a man, knowing where your prostate is, is fairly crucial. In 2014, just under 47,000 men were diagnosed with prostate cancer, and over 11,000 men died from the disease.

For our own study, we asked 63 members of the public, ranging in age from eight to 74 to place 20 body organs and structures onto a map of the body. Thankfully, all of the participants knew where their brain was located. They were also quite good at identifying the cornea and the biceps muscle. But when it came to the abdomen, things got worse. Some people located the liver on the wrong side, adrenal glands in the neck, stomach in a variety of locations and diaphragm in the wrong place.

Men were better at identifying specific muscles than women, but not at internal organs, where females were better.

We also asked the participants if they’d visited a healthcare professional in the last seven days – ten said that they had. This had two objectives. The first was to see if people could recall what they had been informed about. Our results suggested they couldn’t. The second was to see if going home and using the internet after their consultation would make them better at answering questions about their anatomy. It didn’t.

I was relieved to find that healthcare professionals performed significantly better than the rest. 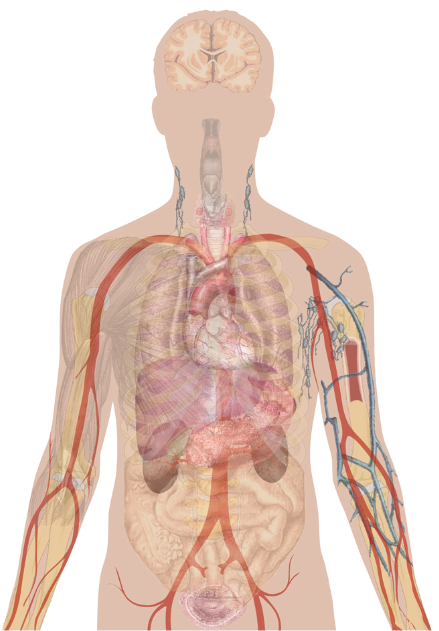 Finally, there was no significant difference in performance based on academic qualifications. We saw a peak in the knowledge level around the age of 40, which coincides with increased GP referral rates, suggesting that this is the age bracket where people begin to take more notice of their anatomy.

Reassuringly, pre-adolescent children also fared well. There is no formal anatomical education in the UK for children in this age group, but there is obviously a thirst for knowledge about the subject, given how well they performed in the study.

But we really could do more to teach basic anatomy in primary and secondary school. It may help people live longer, healthier lives, and it would certainly make doctors’ lives easier.

This article is republished from The Conversation under a Creative Commons license. Read the original article.