The story of penicillin

This article tells the interesting story of how Penicillin was developed from accidental discovery to the life-saving drug that many of us may have taken today. A large part of this research took place at the Dunn School of Pathology at the University of Oxford.

How it all started

Everyone associates Alexander Fleming with penicillin. It was in September 1928 at St Mary’s Hospital Medical School that he noticed stray mould growing on a plate of bacteria, and around the Penicillium mould was a clear area where the bacteria had been killed. He recognised the significance of the observation and set about identifying the antibacterial substance responsible, calling it ‘penicillin’. But he never went on to purify the substance or test it against bacterial infections in animals or humans.

Howard Florey (Professor at the Dunn School of Pathology, University of Oxford) recruited chemist, Ernst Chain from Cambridge University. ‘It was Chain who rediscovered Fleming’s earlier paper on the antibacterial qualities of penicillin,’ says Eric Sidebottom (an expert in the Oxford Pathology department’s history).

Florey and Chain began work on penicillin in 1939, says Eric. ‘They quickly confirmed Fleming’s findings and began to purify the substance.’ Here the contributions of another member of the team, Norman Heatley, were crucial. ‘Heatley had the technical vision necessary to purify penicillin,’ says Eric. He devised a successful method for extracting and purifying penicillin from the cultures of mould grown in hundreds of vessels throughout the Dunn School labs. The automated process he came up with made use of bedpans, milk churns and baths all rigged together, yet it worked very well. 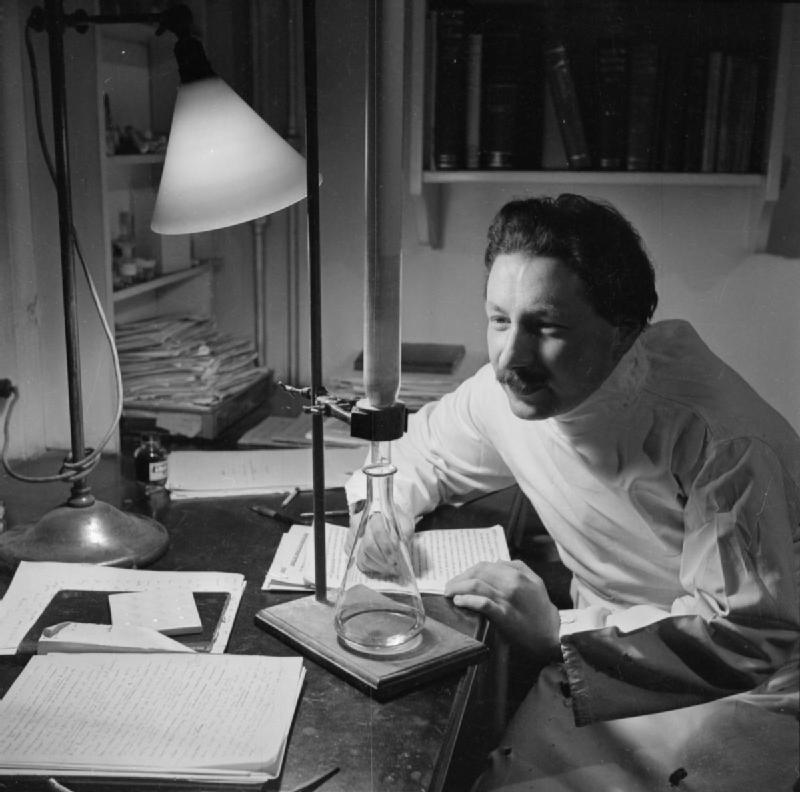 Ernest Chain undertakes an experiment in his office at the School of Pathology at Oxford University in 1944.

By the height of the blitz in World War Two (May 1940), the team was at a point where they could carry out that crucial experiment in mice. It would really test for the first time whether penicillin could be an effective antibacterial drug.

The results of the experiment were clear and impressive. But as Florey pointed out: ‘Treating and curing infections in mice was one thing, but humans are roughly 3000 times bigger and would need 3000 times more penicillin.’ As a result, the Dunn School was turned into a penicillin factory, production running 24 hours a day...

From mice to men

By February 1941, when Florey felt he had enough to begin trials in humans, he enlisted the help of a young doctor at the Radcliffe Infirmary in Oxford, Charles Fletcher. The first patient Albert Alexander, a 43-year-old policeman, was treated with penicillin on 12th February 1941.

The stories normally have it that Albert Alexander had scratched his face on a rose bush, the wound had become infected and the infection had spread. But Eric offers an alternative. He has an old police pamphlet of stories about individual officers which suggests Alexander was injured during a bombing raid while he was on secondment from Abingdon to Southampton. He was transferred to the Radcliffe Infirmary when his infection became severe. Frustratingly his hospital notes don’t reveal the cause of his infections.

Charles Fletcher injected Alexander with penicillin regularly over four days, and within 24 hours he was greatly improved. But even though the team went as far as extracting the precious penicillin from his urine and re-injecting it, supplies ran out before his cure was complete. He relapsed at the beginning of March and died a month later.

Of the next seriously ill patients, four made recoveries thanks to penicillin. A child of four was also cured of his infection but died of an unrelated brain haemorrhage.

Penicillin truly looked like a miracle drug: infections that had been killing people previously were cured. As companies in the US and UK began to take up the manufacture of penicillin, enough was being produced to treat some of the military. Supplies accompanied the troops in the D-day landings and the death toll from infected wounds during the campaign was dramatically reduced.

Still, Eric Sidebottom suggests some sensitive decisions had to be made about how best to use what penicillin supplies there were: ‘In 1943, Florey and Chain travelled out to North Africa to oversee the use of penicillin to treat infected injuries. Penicillin was also found to be extremely effective in treating the 'clap' (gonorrhoea). This presented the military with a problem: with limited supplies, which soldiers should receive the drug – those with 'clap' or those with horrific injuries? Churchill reportedly decided to use it to “best military advantage” (give it those with the 'clap' to get them back onto the front lines more quickly).’ 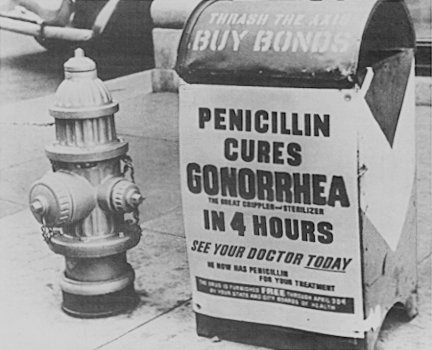 So how did the greatest medical advance of the 20th century come to be solely linked to the name of Alexander Fleming in most people’s minds? After all, Fleming shared the Nobel Prize with Florey and Chain. And it was the Oxford team’s dedicated work that turned Fleming’s chance observations into a safe, effective drug capable of being manufactured on a large scale.

Eric has the answer: ‘When the potential of penicillin became clear in 1941 and 1942, St Mary’s Hospital realised what a coup it was going to be. The dean of St Mary’s, Charles Wilson (soon to be ennobled as Lord Moran), was also Churchill’s physician and president of the Royal College of Physicians. When he said, “We [St Mary’s] discovered it,” people listened. More than that, Lord Beaverbrook – the powerful press baron – was a patron of the hospital and was instrumental in setting the agenda in the press. In contrast to all the media attention Fleming was getting, Florey refused to speak to the press at all.’

The history of the Dunn School of Pathology didn’t begin and end with penicillin, of course.

Penicillin inspired worldwide efforts to discover new drugs that could conquer the many diseases still threatening the world. Further antibiotics soon followed, including streptomycin, chloramphenicol, the tetracyclines, and erythromycin. The Oxford team continued to work on this area and another important family of antibiotics, the cephalosporins, were developed from research by Edward Abraham and Guy Newton at the Dunn School. Proceeds from these patents continue to fund research around the University and are paying for most of the cost of the new OMPI building at the Dunn School.

‘Florey’s other legacy was a world-class research programme in Oxford,’ says Eric. ‘For example, Sir Henry Harris and Sir James Gowans were two of Florey’s students.’ Together they did a lot of the foundation work that allowed the discovery of monoclonal antibodies by others later on, Eric says.

Gowans worked out the life cycle of lymphocytes – a type of white blood cell that is central to our immune responses and fighting off disease – and their recirculation, while Harris developed the experimental technique of artificial cell fusion. In addition to leading to the discovery of monoclonal antibodies, this led to new theories about how cancers become malignant and how the body suppresses tumours from forming.

Read the full article on the University of Oxford's Science blog.

Do you make | your own luck?